Drakes Tabanco is another addition to London’s growing list of Sherry Bars. This once-unknown category has really taken off in recent years creating lots of opportunities to bring the sense of place of Jerez to the metropolis. 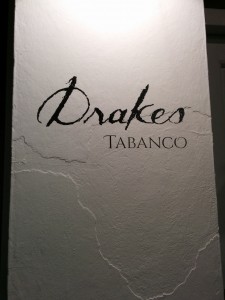 Drakes Tabanco (awkwardly two words and I wonder whether it will simply be known as Drakes) tries to keep things relatively simple, but with a little unusual spin, making the most of the narrow entry area to give the impression of a real Spanish tapas bar, replete with sherry casks (that are actually used for serving your sherries), yet opening up into a spacious dining area beyond.

The venue is large enough to do well (I love José, for example, but worries of whether you will actually get in the door might stop many from travelling there ‘on spec’) and simple enough to avoid kitschy-ness, yet it might also feel a little cold when not busy. The restaurant has been open a month and I was surprised that on my visit, albeit a Wednesday, there was not more activity.

The choice of wines is rather limited, though they are all available by the glass, offering a decent range of Spanish favourites – you have to respect a list that only has 3 reds, but includes a Mencia for example. The strength should be the sherries, and one GREAT feather-in-the-cap for Drakes is the fact that you can get Fernando de Castilla sherries here, including the Fino en rama.

The main sherry range are all served from the barrel, which is impressive, I guess. However, I personally would prefer more investment in a broader, interesting range than in the ‘venenciador’ skills of the staff. 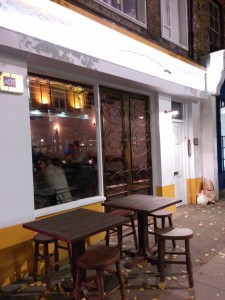 The food menu is all tapas dishes, with a few slightly larger dishes labelled “mains”.

I had some tasty sardines and a sliced, smoked scallop (just the one, for £9.50) which I have to say was a little underwhelming for the price, and some very tasty lamb prosciutto – an unusual source of the meat which had actually been cured in London.

From the mains I tried the Octopus with Chorizo and Chickpea, which was tasty but not as full-flavoured as I expected, and a Beef Short Rib on parsnips that I did enjoy, though hardly felt transported to the dusty streets of Southern Spain.

Overall, the experience was friendly and inviting for a place in such a busy food area of London, but it also felt a little artificial and unambitious at the same time. Drakes is the third in a ‘set’ (but not a restaurant group as such), sharing one of its owners with Barrica and Copita, that are already well known in this category of restaurants in London. I’m hoping this experience is more about being new and finding its feet, and I trust they will add that extra sparkle of Sherry magic to the place to bring it fully to life in the near future. Worth checking out in any case.