We really do live in the most amazing of times. I say this in particular because of an experience this weekend which demonstrated quite how different my kids’ will see their relationship with celebrities, and their influence on the world, than I had growing up.

Each weekend I spend time with my kids on a creative activity that would have been unimaginable in my youth. We create videos together, and share them with the world via Youtube. Today that is somewhat unremarkable, but it has yet to become truly commonplace. There is much I have learned from this, but that story is for another time. I want to tell you about one specific video, and a pleasant surprise.

While my daughter and I have focused on Loom Band videos, my son has taken a more literary direction. Aged just 6, he simply adores reading, having been converted by the Captain Underpants series of books this summer. We decided to make Book Review videos together so he can share his enthusiasm for books with other kids, and also indulge in some drawing. 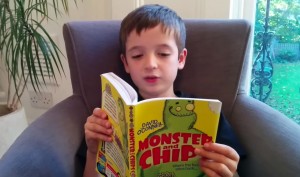 Let me tell you a story …

His second book review was for “Monster & Chips”, the first in a series of novels by David O’Connell, a London-based illustrator and author.

Our format includes a short review, a brief reading, and then an illustration either taken from, or inspired by, the book. It is a lot of fun. What we had not really expected was who might watch it.

You count on aunts, uncles, grandparents and friends to watch these things, plus maybe the occasional viewer pulled in by a search. However, when I shared the video on twitter, I did what I usually do with these posts and tagged the author (@davidoconnell), largely out of courtesy. We were taken aback an hour or so later when we got a message back that said:

@thirstforwine This is the Best Review Ever! Thank you so much, Duncan!

Wow! Now, I’m not sure my son really took it in this time, but the rest of us were impressed to think that this little video, made for fun and learning, reached the author and hopefully made him smile too.

It reminded me that social media has really shrunk the world so that we are, truly, just one step away from being “in touch” with whoever we want to reach – politicians, actors, authors, teachers, athletes, and so on. Even winemakers. Some will have so much attention they will probably not see our messages, but there is still the chance to reach them.

Who we reach out to, and why, is up to us, and the people who make my son’s life so exciting right now are the designers of Lego, the programmers behind Mario Kart, and the authors of fantastic books like Monster & Chips, Captain Underpants and Stick Dog, and if he can feel like he is also part of their world, who knows where his dreams might take him.

The magic of social media is not in the creation “marketing channel”, but the connections between people. I do wish that more wineries and winemakers would take this approach and reach out to consumers of their wines, like David O’Connell did for my son, and inspire us to care more about their creations. Who knows what magic that could have on our relationship with those wines?

Here, for your entertainment, is that video by Duncan. You can follow along with more videos on his new blog: byduncan.tumblr.com