She won! I’m so very proud of my daughter right now. 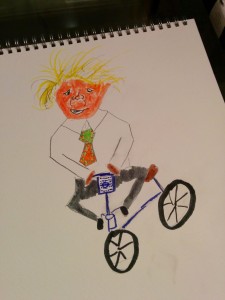 Back in January, I mentioned that my daughter had taken part in a competition to draw a portrait of a politician sponsored by a site called iChild.co.uk and Moshi Monsters. Tonight we heard from the organisers to learn that the illustrator chosen to judge the competition had selected her portrait (above) as the winner. The message was:

“All the kids did amazingly well! The Boris Johnson from Nona one wins as it’s the most fun picture! “

The prize is a trip to Moshi HQ (I assume it is in London, not Monstro City) and some other goodies.

I’m very pleased she won because she was very proud of what she created, even though it was done in a hurry, and she had to learn some techniques very quickly as she has had very few specific classes for drawing although she has always had artistic interests. It can’t be easy when your dad arrives after dinner saying,

“Instead of watching your beloved Dr. Who on TV tonight, would you like to create a picture for a competition … because Daddy said he would ask you, and it needs to be sent by the time you normally go to bed?”

It must be quite something to see your picture shared across the internet, including the home page of the online editions of national newspapers, get a mention in school newsletters and then be treated to a special behind-the-scenes visit to Moshi HQ.

I hope that, like Charlie Bucket’s Uncle Joe, I get to accompany her on the tour and I will report back.

There were some other amazing portraits in the final selection, so do take a look, but marvel at the balancing act of a certain Mr Boris Johnson.