This morning I had a terrible realisation. I am 45. I have voted in every single election I could since I was 18. Elections for the national parliament, for local councils, for my MEP, for mayors and now in two referenda – one on electoral reform and the other on Britain’s membership of the EU. In all those years, in every single election, I have NEVER been on the ‘winning’ side.

I am not a sore loser. I’m actually a very experienced loser. I know how to lose and yet feel I made a contribution. I voted with my conscience and for the agenda I believed in, even when I knew I was going to be in the minority.

What is different with the votes in 2016 is not that I lost the argument, but the realisation that the process itself is a sham – not rigged, but literally a ‘spurious imitation’ of a decision-making process. 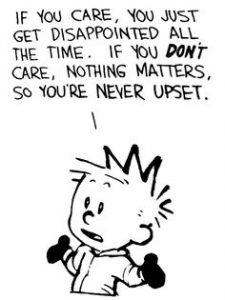 The assumption we have always made is that while we might all have different views of what the facts are, and what the truth might be, that on balance the greater good would eventually win out.

We believed that all sides were somehow held to account. There were rules, and with rules you have arbiters. You couldn’t just break these rules (by, say, making false promises, knowingly false statements, withholding tax returns, or breaking racial/sexual/decency laws) in order to win and actually get away with it.

But you can. And they did.

The message is: It doesn’t matter what you do, think or say if you are brazen enough. For evidence just look at the record of Boris Johnson or Donald Trump, amongst others.

The world woke up to some shocking news this morning when it was announced that Donald Trump is to become the 45th President of what is, or was, the most influential country in the world. After the shock of BREXIT for those of us living in the UK and EU this is almost too much to bear. What is hard to put into words exactly is WHY it is so shocking and depressing. Life goes on right? Surely it’s just another election?

The question is how to explain to my kids that it is worth getting engaged with politics, campaigns or communities, and give them a moral purpose, if we, as their parents, feel that their efforts and goodwill will ‘trumped’ by liars?

But the next important realisation is that there are many in this country who are not, as I am, a white, middle-aged, university-educated, employed, parent and homeowner living in London, who have been experiencing this feeling for a long time.

We should not be upset with those who vote against what we believe in, but we do need to be angry with those individuals, politicians and their financiers, who, for personal gain, are abusing people’s trust, taking advantage of their pain and making things worse.

This is a very trying time.

This time we were all losers.