I have been impressed by the sparkling wines of Franciacorta in Italy. SO many of the wines I have tried have been interesting to drink – quite a feat for any wine region.

If there is a flaw in the current nature of Franciacorta, I would argue that it is “over-designed” and producers pay a little too much attention to measuring themselves against others’ yardsticks and not clearly on creating a unique wine that will reach wine lovers all over the world.

Franciacorta is a very small region, and it produces barely enough to satisfy the local (northern) Italian thirst for its wines. No wonder the rest of us have not heard about it, or can’t get hold of any. However, as their guests at the recent EWBC it made me look carefully at their wines, and what you (the wine-loving readers) might want to know about them. 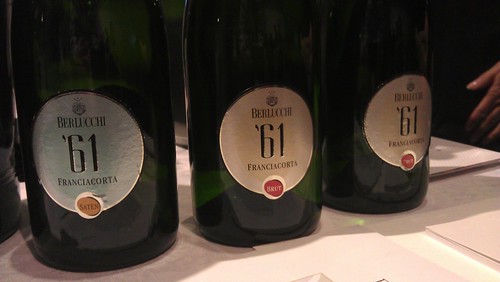 First, what is “Franciacorta”?

If you’ve never heard of Franciacorta, you are not alone. This is the name of the region that creates probably Italy’s most prestige “Methode Traditionelle” sparkling wine in the style of Champagne, using many of the same varieties and techniques. The main grapes are Chardonnay and Pinot Noir, just like Champagne (and other sparkling wine producing areas such as England or South Africa), but also Pinot Blanc. When it comes to Italian sparkling wine, Prosecco may currently be the best known having captured a market for informal, party, aperitif drinking, but Franciacorta is the elegant partner for dinner and more refined events.

a highly unusual level of cooperation

The region of Franciacorta is in Lombardy, in the north of Italy, just outside the City of Brescia (beautiful host of the 2011 European Wine Bloggers Conference), south of the beautiful lake Iseo, at the foot of the Alps, and on the main road between Milan and Verona. This is important. Not only are the climate and soils right for producing sparkling wines of quality, but this is Italy’s commercial heartland where many wealthy investors live, and they have been the force behind the area.

The name Franciacorta comes from the latin Franchae Curtes, or Monastery-controlled courts that were, thanks to the power of the Church, exempt from the taxes of nearby Brescia. It is a small coincidence, therefore, that seven centuries later the name focuses attention on the inspiration of the region’s wines – the prestige sparkling produce of France.

Sparkling wine production in Champagne is traced to around the 17th Century. In Franciacorta it can be traced back to 1961, which makes 2011 just the 50th anniversary. In that year, Franco Ziliani (not our fellow wine blogger, but his namesake) created 3000 bottles of a sparkling wine for the Guido Berlucchi winery … and it sold well. So well, that the local entrepreneurs didn’t just decide that they liked the wine, they decided to MAKE it, and so the region of Franciacorta was born and the fabulous, well-equipped and architecturally varied wineries we know today sprang up virtually overnight to establish the region.

No need here for too much detail, but because these wineries set up very much around the same time, and because they were backed by commercially savvy owners, it was also easier for them to club together to create a strong association, the Consorzio per la Tutela del Franciacorta. A Consorzio is a voluntary body that sets the rules on what grapes can be planted, how, where, etc. and how the wines should be made, and then promotes the work of the members.

The Franciacorta body is recognised as one of the most thorough and strict in Italy, which is easier to do when there are only around 110 producers in the whole region, and 104 are members of the association. This, let me tell you, is a highly unusual level of cooperation in Italy!

What about the style of Franciacorta wines?

Less simply: Dry, sparkling wines, made in the traditional method, with second fermentation in the bottle

And finally in a bit more detail:

There are three main styles of Franciacorta wines:

A game of statistical one-upmanship

Even these complexities are small compared to the detail of the rules applied to these wines, and this is one of the problems.

First, the Consorzio rules are very prescriptive. In the presentation to wine bloggers, the eloquent Ricci Curbastro (himself a fine Franciacorta producer) proudly showed off how in this region yields were smaller, quality higher, ageing longer and production smaller than its major competitors. In one case, yields in the winery were 1% tighter (64% instead of 65%) than Champagne in an apparent game of statistical one-upmanship.

Then there are the ranges. I have visited very few wineries in the region, but let me take one example I have. Majolini creates some lovely wines across the board. The family behind it are very friendly, welcoming and committed. However, they are a medium sized winery that owns 22 hectares of vineyard in this appellation, yet they make around 11 different Franciacorta wines (never mind all the other products they offer). On the surface this offers wine consumers lots of choice and uniqueness, but in practice it means that no wine is ever made in the quantities, and at the economies of scale, that will make it more affordable and available to more people around the world.

IF you’ve never tried the entry level wines of an area, are  you ever going to take a risk on the expensive, high end and low volume wines?

Finally there is the dilemma of pricing. If you ask any Franciacorta producer what their market it (internationally), the response is generally along the lines of:

“to produce high quality wines for ‘wine lovers’ that are looking for something new, and to price these ABOVE Prosecco and BELOW Champagne.”

As someone with commercial marketing background, this makes me wonder. How can they look to achieve success by OVER delivering on the style of the wine, being MORE strict in the vineyard, ageing it longer, making it in smaller quantities AND selling it for a lower price?

They can’t, at least not for ever.

Franciacorta is a quality wine region still grappling with its identity, like the “teenager” it is in terms of development. It is not really clear what the Unique Selling Proposition (USP) should be, and more importantly, what moment, or occasion, for drinking that this region can claim for itself. It would be worth bearing in mind the advice of Antoine de Saint-Exupery above – cutting back, simplifying and deciding what is truly key to the region is much more important ultimately than adding ever greater details to the picture.

If I had to suggest a place to start, it would almost certainly be with the Saten style of wine, but others such as Simon Woolf have made another excellent suggestion to seek out wines that include Pinot Bianco in the blend.

However, what should not be doubted is the quality of the wines being produced, and the potential of the owners to deliver this in time.

I hope that these issues are resolved soon, and they find a way to get more of these bubbles into the glasses of wine lovers across the world so we may all raise our glasses and remember this 50th anniversary year as the one where Franciacorta truly took off around the world.