There are few places to eat in London so dependable you can refer almost anyone to them, but one such place has to be Pizarro.

Along with its sister Tapas restaurant (though it is probably more appropriate to call it a glorified counter it is so small), José, Pizarro is the place to experience amazing quality Spanish (and Catalan) dishes in London. The creation, unsurprisingly, of José Pizarro, these two restaurants are within knife-throwing distance of each other on Bermondsey Street, SE1.

José himself has spent many years in the UK and previously established Brindisa as a quality name for tapas food before deciding to open his own restaurants. Not only has he managed to open the two restaurants and publish a cookbook, but he has also impressed with the quality of other chef talent he has brought on and trained – which gives him a *bit* of time to star on Saturday Kitchen amongst other TV appearances. 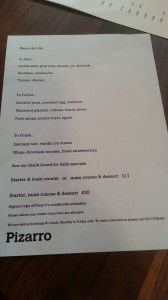 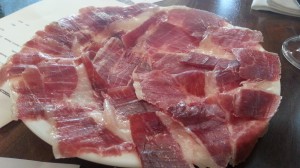 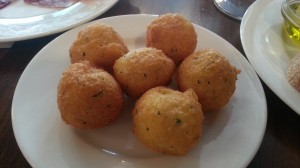 One of the hardest things to do, when bringing world cuisines to another country, is to source the right types of fresh ingredients to the dishes justice, but José has excelled at finding sources of shell-fish, meats and vegetables that taste really authentic, even if he is adding his own modern stamp on them for the UK customer. The result is that whether you go to either restaurant there is an array of delicious looking FRESH options available.

My favourites at José have included the Razor Clams and Prawns in garlic, but I headed to Pizarro because they are now doing a fantastic “Menu del dia” (fixed price) lunch menu with delicious options for only £17 for two courses, and £20 for three. Plus, when it comes to wine, both restaurants are havens for Sherry lovers as well as offering some delicious choices from around Spain, most of which are available in 250ml and 500ml carafes for sharing. You’ve got to love that!

During my latest visit I thought it would be great to road-test the Pizarro ‘menu del dia’. We kicked off with a refreshing glass of Fino to wake the tastebuds and accompany some fantastic jamon and some cod ‘croquetas’ (all of which were not on the menu, but offered as tasters from the kitchen). 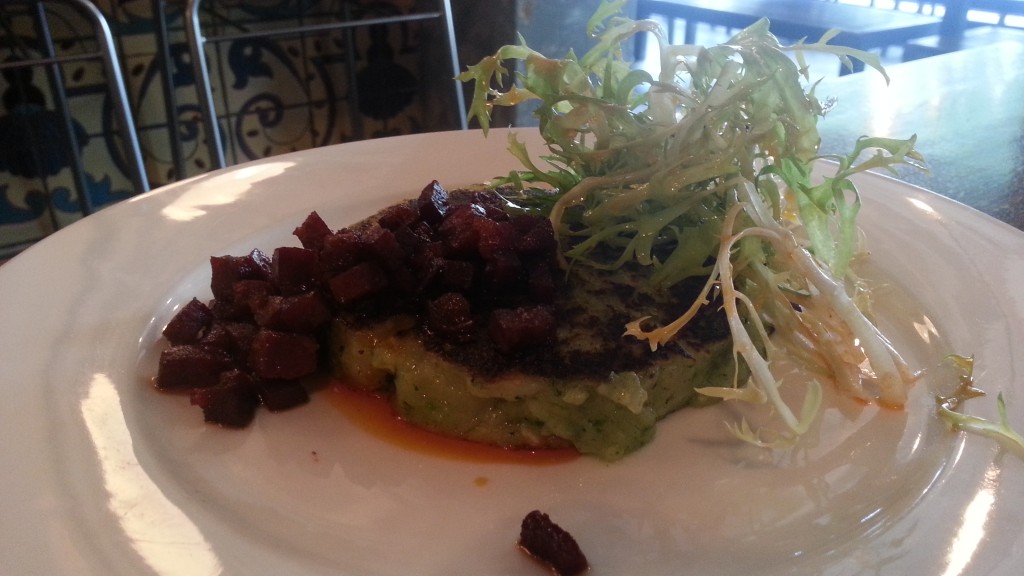 My starter was Trinxat, a Catalan version of Bubble & Squeak, made with a potato and cabbage stew that was lightly pan friend and then topped with chorizo. A warming starter with the added spicy magic of chorizo, that still managed to leave you wanting more. I accompanied this with a delicious Godello (Abad Dom Bueno, 2012) whose light pear-and-apple fruit balanced with fresh acidity, perfectly complemented the dish. 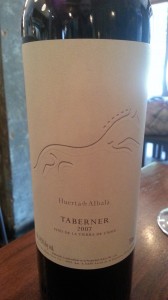 My main course was a succulent filleted mackerel with a dash of black olive tapenade to add an umami kick, and some peppery mizuna leaves. Together they were wonderful and a great lunch dish. To try something different, this dish was matched with a stunning red wine (YES! red wine with fish can work). This was the Taberner 2007(by Huerta de Albalá), a ‘Vino de la Tierra de Cádiz’ in the far south of Spain, yet the wine was elegant and its cedary and lightly balsamic notes matched the fish + olive mix extremely well.

In summary, the food is incredible value, and the wine options are very varied even at the lower end of the price scale. The staff were all extremely professional, attentive and informed, and if you are lucky, you’ll also get a chance to shake hands with the affable José himself. That’s more than anyone can ask for a lunch, no?

BTW, I can’t say too much, but you should DEFINITELY look out for details of the Posh Lunch Club

* I ate at Pizarro on 25 June for a planned lunch with a friend, but was then “invited” by the restaurant as part of the roll-out of the new ‘fixed price’ menu.