Lugana is the land of just one grape; Turbiana. Turbiana is a local traditional name for a white grape we also know happen to know as Verdicchio, a grape responsible for some great wines elsewhere in Italy, and one of the few native whites capable of ageing.

We’re all in this together, separately 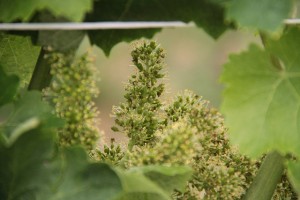 This is the second in a short series of articles about the region of Lugana, a small Italian wine region in terms of size, but with the scope to shine in the world of wine.

The common name for this grape has been Trebbiano di Lugana, often just called “Trebbiano”, but this is misleading. If you’ve had other Trebbiano wines, chances are this was the Trebbiano Toscano grape, otherwise known as Ugni Blanc in France. Now, modern research has allowed us to differentiate between other grapes using the Trebbiano moniker and those grown in this region, and to prove the genetic similarity to Verdicchio from the Marche region.

Verdicchio, to quote Ian d’Agata, an expert on Italy and its native grapes “… is arguably Italy’s greatest native white grape variety.” That’s not to say it is always shown at its best, but the potential is there as it can make many different styles of wines and can age.

Of course, while its ‘nature’ shows it is genetically linked, the ‘nurture’ of this grape in Lugana is unique. Not only are the soils in this region largely made up of poor clay, but the lands are prone to flooding, so much so that vineyards have to be shaped when planted to create a dome in the centre to allow water to run off. It also means the vines look like teenagers whose long legs have outgrown their clothes, with unusually long bare trunks that allow greater air to circulate between the soil and leaves to help them dry out faster.

Whatever the name, the concentration on just one grape is somewhat unusual and you might fear it might make the region less interesting, not that this approach has held back places like Burgundy. In fact, how Turbiana has adapted to local conditions, and how local winemakers have learned to deal with it, makes Lugana a potentially very exciting area for wine consumers to explore – offering a combination of variety and interest but also a degree of confidence and consistency that many other regional ‘brands’ do not offer.

It is ironic, therefore, that whilst the Torre di San Martino stands as a symbol of how the different regions of “Italy” came together for a common struggle, that the region it now watches over, like all other Italian wine regions, is intent on differentiating itself from its compatriots as much as possible.

What you need to know about Turbiana

Borrowing from my friend Helena Nicklin‘s concept of ‘vinalogy‘, you could think of Turbiana as the Catherine Deneuve of the wine world. The wines made from this grape can take different characters, but at their core they maintain an attractive freshness, a lightness but also a strong, stony elegance that in many ways improves with age.

If this is not enough to tickle your vinous fancy and you need more details, then let’s say that there are two main characters in the region.

On one side are the crisp, sharp, “mineral” and white petal style, usually found in the youngest wines, from the more chalky extreme vineayrds, and those enjoyed in Italy itself. These are mainly just labelled “Lugana” and sold as young and fresh as possible.

On the other side are the wines that start to show more tropical, mandarin orange fruit and these can be young, from the traditional areas with their heavier clay soils, but also the style the wine adopts as it ages in tank and bottle. The could be labelled “Lugana” but you are more likely to find them as “Lugana Superiore”, or even better as “Lugana Riserva” – official classifications that requires the wines to be aged in the wineries before release, to really show their potential.

Here are some more details of some of the styles:

1. Crisp, young, grapefruit citrus, white floral blossom, white almond, tangy. Like a attractive young Catherine in Belle du Jour, these wines can be intense and sharp, yet complex and linger long on the mind.

2. Rounded, almost tropical, mandarin orange, pink grapefruit and green herbal notes. These wines are more obviously generous, sometimes with a hint of residual sugar to round out the palate, and often from the deeper clay soils of Lake Garda’s silt plain.

3. Mature and evolved, these wines retain great freshness and structure, but develop spiced apple notes, hazelnut skin, some dry orange orange peel and a hint of marzipan when more oxidised.

4. Late harvest styles are sweet, but not overly so. They can taste like peaches with wild honey, a lemon marmalade with ginger notes (almost ginger-ale sometimes) but also a dry, autumnal leaf character that adds complexity to a wine that rarely drifts towards cloying sweetness thanks to the acidity. Some are labelled Late Harvest, or “Vendemmia Tardiva” but you can get this style on some Superiore/Reserva wines that don’t quite hit the legal limits of sweetness.

5. Sparkling: Overshadowed by its famous neighbours, Prosecco and Franciacorta, sparkling Lugana struggles for attention. However, a range of sparkling wines, both classic bottle-fermented and Charmat method, can be found that all have that remarkable crisp acidity which seems to give long life and freshness even for wines aged for 5 years on lees. Worth seeking out.