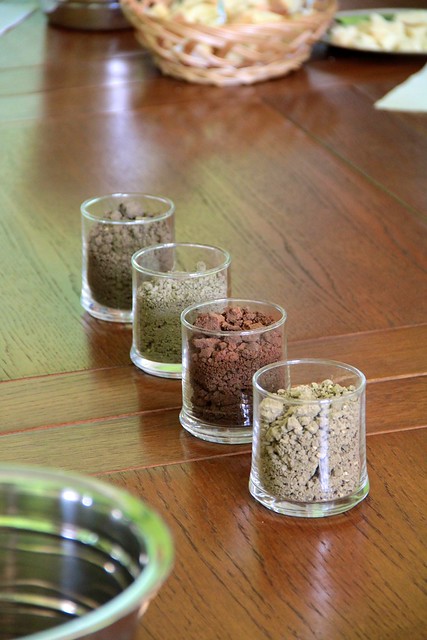 We were introduced to Istria, this beautiful corner of Croatia on the Adriatic coast, as the “land of the four soils”, and it is very hard to move in food and wine circles here without hearing the colourful refrain of “Red, White, Grey & Black“. These are in fact only half the story, because in Spring, the country is also alive with yellow and white flowers, pink peach blossom, green grass, blue seas and purple and orange sunsets. However, we were here for just three days to focus on the soil, and its effect on the wines, foods, traditions and personalities of Croatia.

The first-time visitor’s first impression HAS to be the Red. “Wow, look at that soil!” I exclaimed, unaware of the initiation I was to receive over the next few days. We were on our way to visit Roxanich, the increasingly well-known producer of some fantastic, but also challenging wines. The red vineyard soils, delineated by green grass borders and yellow accents, screamed for attention through the bus windows. 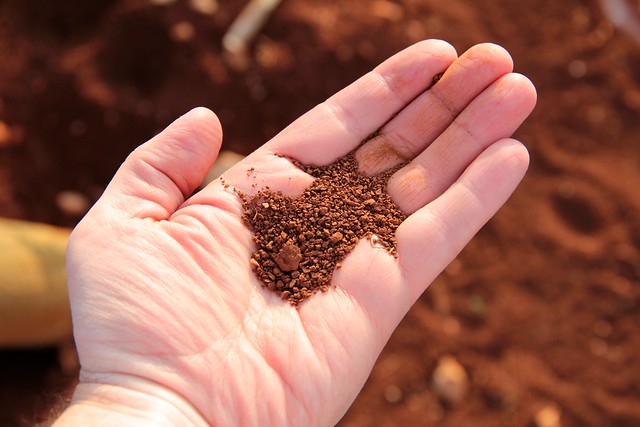 The wines, it turned out, have the same strong personality, solid confidence and masculine charm of their wine guide (I hesitate to say ‘maker’ as it implies more manipulation) Mladen Roxanich, and his team. In their youth, his wines seem quiet, understated, somewhat enigmatic, but as they mature, the wines – particularly the white wines, are transformed into charming, lithe and confident individuals. Roxanich achieves this by the somewhat controversial technique of extended maceration, leaving the juice from the grapes in contact with the skins for incredibly long periods – from 20 to over 170 days (compared to mere minutes or hours for most white wines), particularly for the local hero, the Malvazija Istriana of Malvazija Istarska. This is, in his view, the best way to express the uniqueness of the soil, the grape variety and the vintage, and these views are strongly held.

His wines do not have the fresh, primary fruit we might normally look for in a white wine made from a crisp grape such as Malvazija, and instead, develop an amazing range of “secondary” flavours of dried fig fruit, wild herbs, honey while retaining a fresh minerality, perfect complements to the range of Istrian salami and other dried meats shining bright red on the plates in front of us. These are spectacular examples of what a complex wine can be, but in a fashion that the average wine drinker will probably not have experienced.

The reason, at least in part it seems, is that these red soils do not retain much water, forcing vines to dig deep roots and fight for water and nutrients deep down in the earth. This dry soil is something we then experienced first-hand later that afternoon in the newly planted vineyards belonging to Bruno Trapan. It cost him a fortune to clear a small patch of land of enough rock to be able to plant a new vineyard, and today the spindly young vines appear to stick out in desperation from a sea of reddish brown instant coffee granules, such is the consistency of the soil. Trapan’s wines from these soils also show interesting minerality, but he chooses to express this through slightly more traditional crisp citrus and white floral wines, and some rather tasty, plummy and bright red wines, the star of which was a juicy young Teran. This is a local red grape that seems to capture the wild and rugged Istrian countryside well, with its bay tree hedges and other herb plants. Teran in general seems to have a green herbal bay and rosemary edge to the drier, plum and mulberry fruit, and seems to exhibit a spiky acidity that demands attention. 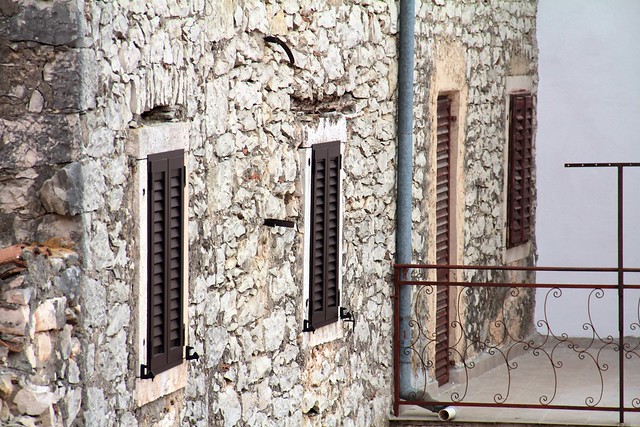 But not all is Red, as generous platefuls of White fish will attest. Nothing comes close to the experience of a 16+ course fish extravaganza at Konoba Batelina by David Skoko. This outwardly unassuming restaurant was packed and served course after course of delicious Istrian fish dishes to complement the Trapan wines. This was a fantastic meal and experience that all Croatian visitors should attempt to replicate if possible.

White was also the bright backdrop created by our docked ocean-liner designed 5* hotel, Hotel Lone (Rovinj), where we took over the Presidential Suite to taste the wines of Misal, and picnic on the vast balcony. There are very few sparkling wine producers in Croatia, so this one small winery and the two young, energetic sisters who run it, have taken it upon themselves to cover the entire gamut of styles, from bone dry, ‘pas dose’, through vintage wines all the way to sweet and even red sparkling wines, to ensure their largely local clientelle have a wine for all occasions. My favourite was the Misal Millenium Brut presented by winemaker Ana Peršuri?.

White stone was also everywhere, showing through in the rough fields that occasionally give way to small quarries. This marble-like stone is also present in the houses, but particularly the ancient cobbles of towns like Rovinj, and set amongst weather-worn town houses with their flaking white plaster and arches built by the Venetians centuries ago. We passed along these streets to find the wonderful hospitality of the Piassa Granda Wine Bar (another must-visit) to taste the wines of Gerzinic, Cossetto, Radovan and Rossi, and acclimatise our palates on arrival. We needed this preparation as some whites, like the Gerzinic and Radovan Malvazija wines showed fresh fruit, white floral notes and minerality, whilst others, such as the fabulous Cossetto Malvazija Rustica showed more banoffee pie or vanilla crème brulee notes, an unusual but rewarding taste. The surprises weren’t limited to the whites though, as I experienced something my notes describe as “the smell of red berry fruit soaking in fresh blood from raw steak” from the Gerzinic Teran, accentuating the “funky” animal nature of this grape, but also a very drinkable juicy red fruit Radovan Merlot 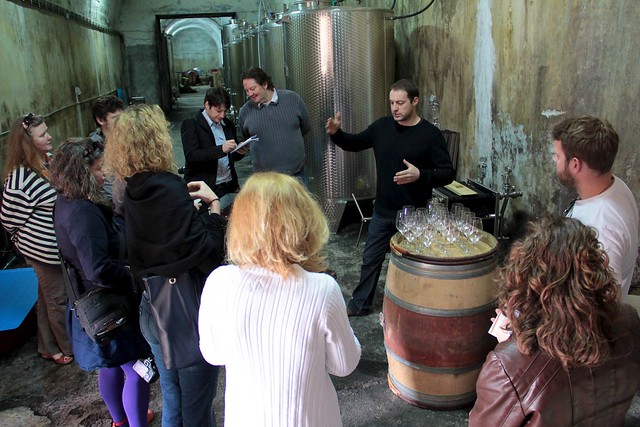 Past the red fields, over the ancient white stone, lies the grey concrete of the wineries. While Croatia and Istria have been making wines for thousands of years, more recent politics & social upheaval have meant that the 50,000 hectares of vineyards that existed in the early 20th century have largely disappeared, and only recent growth has brought that number back to something like 5,000 or so hectares. Most wineries today are new constructions, and concrete is the material of choice.

There are the large, planned, modern and bespoke wineries such as Trapan or Cattunar, or the converted sheds of Roxanich, but there are also the quaint places like Piquentum’s converted, reinforced concrete water bunker. These underground cellars were once fortified military water stores for local barracks, and they have made a surprisingly chilly but productive space for Dimitri Bre?evi?, a half French & half Croatian winemaker who trained in Bordeaux but is making his home in Croatia. Like many others like him who are new arrivals to an area, he makes a great ambassador for his town of Buzet, and for Istria, because he has gone out of his way to study the history, the language and the traditions. His winery is small, but he is doing great things with Malvazija and Teran, which we were lucky to try at Nono on arrival in the country, as well as a delicious Refosk we tasted still in barrel. 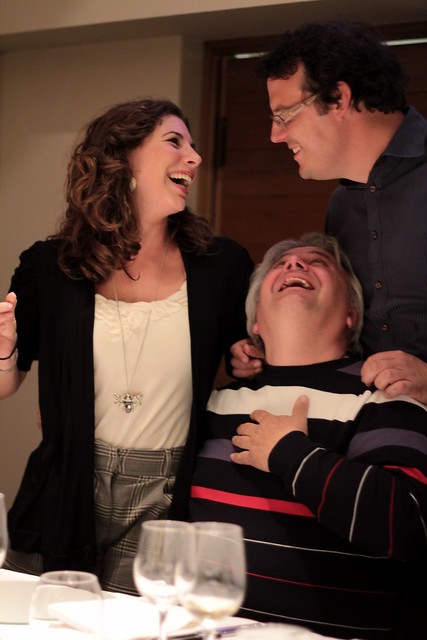 But like all good days, we finish with late, great, dark evenings and ultimately the Black of night (inevitably, it seems there is always extended “socializing” late into the night on such trips, and we saw more than our fair share of starry nights). One of these was spent in the incredibly generous company of Chiavalon who make olive oil so good, you can just about drink it on its own (which we did) but who also offered an amazing array of dishes using their oil to match wines from some of the dark horses of the Croatian wine world: Coronica and Clai. We also got a chance to stumble around a small part of their olive farm in the black of night to see the newly arrived pig & piglets who will be clearing and fertilizing the ground.

Back at the dinner, we tasted wines made in very different styles by friends and neighbours Giorgio Clai and Moreno Coronica. All the wines were expressive and really did speak of something uniquely Croatian, but as before, I was really impressed by the Clai wines in particular. His Ottocento white was soft, with huge body and complexity and some rose petal notes. The Ottocento 2010 red was still bright and very young, but tasted like a berry salad, with some tart red currant, and also some herbal and mineral notes.

Each and every winery showed us something new about the country, and 3 days was not a long time to discover a whole new food & wine culture that I knew nothing about, but it was certainly long enough to know that Croatian wines will feature heavily in my future, and that extended skin maceration for whites is not madness, but an inspired tool for winemakers deserving further research.