Champagne brands really understand that the difference between one wine and another isn’t so much about what is in the bottle or glass, as it is about the story that we build around that experience.

Seeing James Bond drinking Dom Perignon* doesn’t mean the wine will taste better, but it does mean that we get a vague sense of doing something daring and decadent when we see the familiar shield-shaped label emerging from the ice bucket. 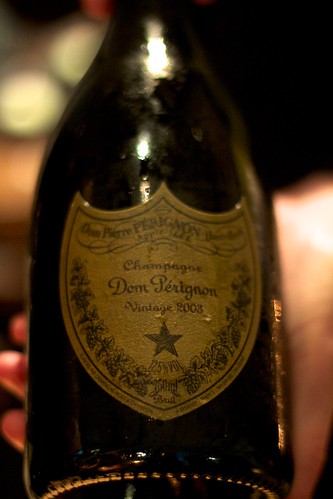 There was much more than a touch of James Bond about the simultaneous release of Dom Perignon‘s latest vintage declaration in London, Hong Kong, Tokyo, New York and Paris (though I suspect James would be disappointed Moscow was not on the list).
The winery organised identikit launches in galleries in each city, carefully staging each with the same wooden table, large screen, twitter-stream, vast black & white photos of the vineyards, dozens of monitors showing carefully crafted photos and videos of the Abbaye d’Hautvillers, and in one corner a glass pyramid with revolving holographic logos.
Impressive.
But what were we here to experience? 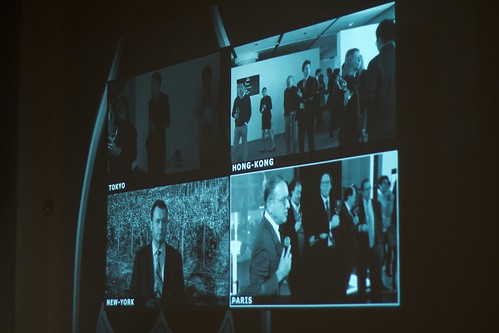 A small cast of carefully chosen “friends”, mostly wine journalists and influencers, were assembled in each city to taste the latest vintage to be released, the 2003.
Oh yes, my dear reader (and, obviously, consumer of Dom Perignon). I said 2003! What a surprise, heh? I bet you knew about the April frosts and thought “they’d never have enough grapes left to declare a vintage in that year“, but we were all surprised. Oh yes! Then you might have thought back to the summer heat and thought, “but the over-ripeness, how could they …. ?” but again, with careful picking and crafting in the winery they have been able to make a wine that Richard Geoffroy, Chef de Cave describes thus:

“Intensity is the signature and memory of the 2003 Vintage. The intensity is unique and paradoxical, hovering between austerity and generosity.”

Unlike most of the assembled friends, I did not know anything of the above, did not have a preconceived idea of a “typical Dom Perignon”, and will readily admit that this is probably the first time I have ever drunk more than a sip of Dom Perignon of ANY vintage. I know nothing about the vintages, and struggled even to make sense of the tasting notes being presented for this wine.
I wasn’t here to learn about vintage differences between Dom Perignon or to compare 2003 with 1976. I was here to be impressed by the brand story. The ancient lineage of the name, traced back to one of the key personalities that “created” Champagne. To witness what a winery can do when it controls fiercely how it communicates its own message.
The most impressive part was the sudden appearance IN the glass pyramid of Richard Geoffroy himself, in holographic form, to tell us his message about the 2003 vintage. I must admit I was almost too entranced by the technology to hear the details of the winemaking, but the effect was mesmerising. 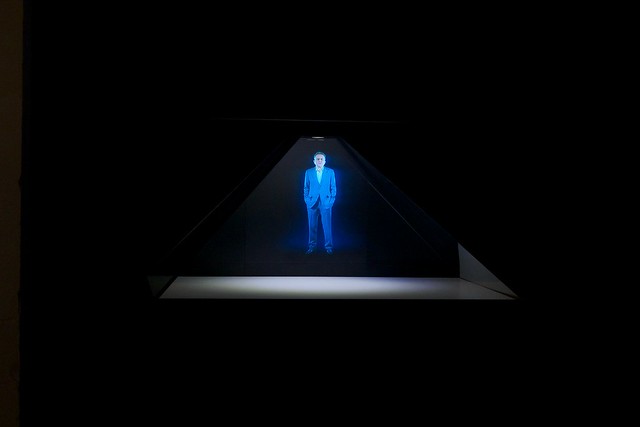 James Bond would probably have managed a clever quip at this stage, I managed to dredge up half a quote from Star Wars instead – “Help me Obe Wan Kenobe, you’re my only hope“. It would have to do.
Certainly, the idea that “we are a global brand, we can reach you wherever you may be, we have the technology, the money, the influence, the organisation and the commitment to make it happen” came across loud and clear. Many of Mr Bond’s well funded adversaries would have been hard pressed to be more imposing.
Yet, you can’t knock them for taking the reigns and making sure that they were telling their own story. Yes, the assembled “friends” are even now typing furiously to spread the news (is it news?) of the release to drinkers around the world, but this is a story carefully crafted before release, like the wine. If more wineries took control of their message, and knew what made them unique, then points and price-points wouldn’t be the main drivers for consumers.
Of course, I do not expect a thousand wineries to rush out and buy a holographic projector, but if they could even decide what they would say if they were to project themselves into it, that would be a start.
Thank you to Dom Perignon and everyone who works for them for putting on the event and for inviting me. I look forward to seeing what further innovations you come up with to tell your story. I particularly await the full-size holographic presentation by Dom Pierre Perignon himself at the next event.
* yes, I remember the old days** before he switched to Bollinger
** yes, I’m geeky enough to know these sort of details about James Bond