Here’s a brief observation, just for fun, concerning my recent post about the return of wine to British mainstream television.

What can you say about wine in 3 minutes and 14 seconds? 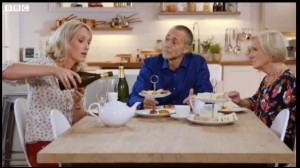 The BBC has relaunched the Food & Drink programme, and to their credit have recruited not only a highly regarded, skilled Chef in Michel Roux Jr. but, unlike other food programmes, also hired a permanent wine presenter, Kate Goodman.

In the first episode I was excited to hear Kate present and discuss Dao wines from Portugal, and stand up for German Riesling. Each region got a decent, if rather general, coverage.

This week, we had sparkling wines from two regions side by side, Prosecco and English Sparkling wine, and the merest whiff about Madeira (though enough to make me wish I had some at home).

As I said on twitter, I will not complain about the choice of wines (I think they are fine in fact, even if one could argue that there are many other styles of sparkling wine that might go well with Afternoon Tea) but it was obvious that the coverage of the wines was rather limited and even more general.

In the interests of research, I timed any mention of “drink” (covering not only wine) in the programmes to see what percentage of the show was dedicated to the “& Drink” part of the name, not just “Food”. The results were:

Several people I spoke to on Twitter mentioned how brief the wine coverage seemed to be in this format, and it seems a waste to have a co-presenter who is so under-utilised.

Let’s hope the format develops, including getting extra air-time and therefore more scope to include useful details on wine.