I discovered the existence of “Boring Conference”, appropriately enough, via social media. Unfortunately I can’t remember who mentioned it, but once I knew such a thing I simply HAD to go. A conference all about how to make something ‘boring’ sound really interesting – fantastic! 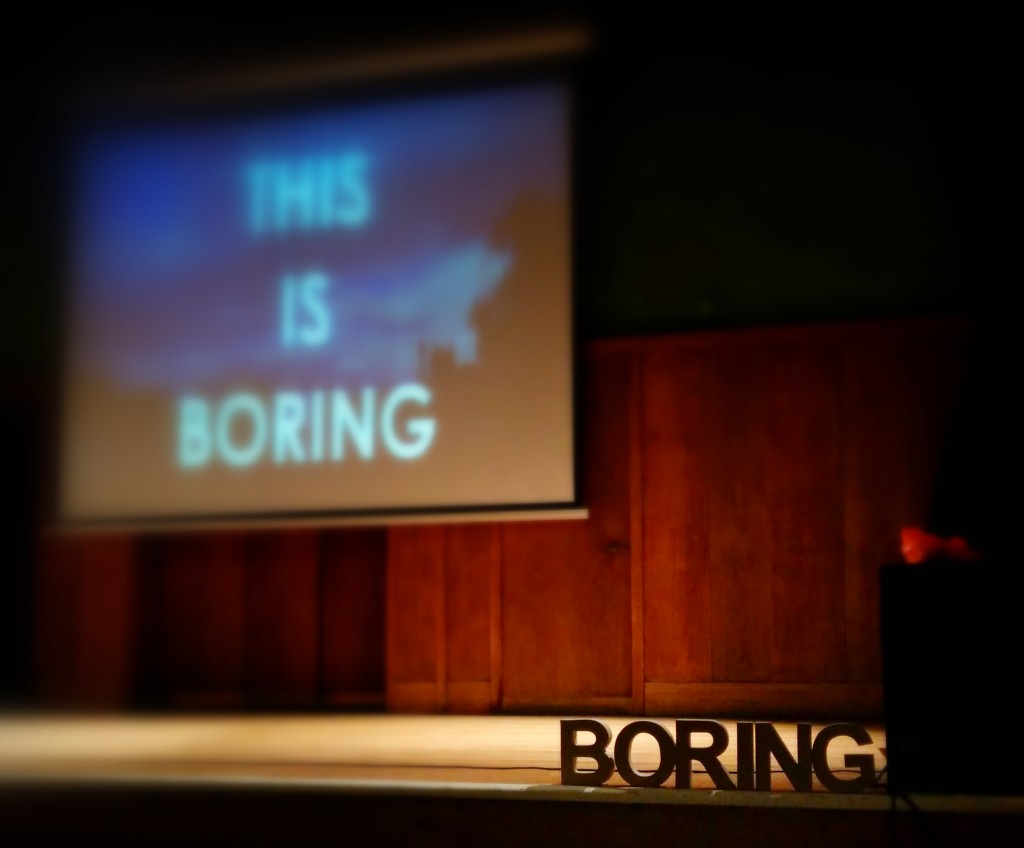 The concept, as I understood it, was that this was a day-long storytelling event focused on “unacceptable enthusiasms” (as @sumit put it) that on the surface sound dull and irrelevant, but which can be fascinating if we make the commitment to listen, and the person talking is truly passionate.

There’s a lot for the wine trade to learn here – topics of little relevance to everyday life, yet that can be brought to life by charismatic individuals.

The conference was very good, and worth attending, and I’ll try to make the next one too. The venue, Conway Hall, was central & reasonably comfortable; the crowd mixed, attentive, respectful, positive; the content, varied and captivating. The ideal setting to tell your story. It shows was great content can do to attract an audience – with 150+/- people there each paying £20.

(For an excellent summary of each talk, check out this post by DiamondGeezer)

Here are some thoughts of mine – in no particular order, and for no particular audience, but hopfeully serving as an “open letter” to the organisers.

James Ward is a good person for this conference. It occurred to me that he was a cross between Simon Amstell and Brian Cox – I’m thinking more of the dead-pan humour than the astrophysics bit, but you get my drift.

I enjoyed James’ organisational presentation for the conference, but also his content about You Bet episodes from the 1990s – an interesting illustration of how unusual interests CAN be interesting, but also made the subject of ridicule.

I really enjoyed the stories that were truly personal interests; the audience could, and did, empathise with these individuals, so stories about German movie title translations (Martin White), childhood list of names (Emerald Paston), ice cream van experiences (Ali Coote), eggs (Martin Austwick) & cookery books of the 50’s & 60s (Helen Zaltzmann), were all worth listening to, even if not stuff that is likely to feature in my personal life.

Other presentations had a more professional note. These were not, it seemed, true personal passions, but rather well crafted stories on relevant subjects. Highest praise should probably go to Andrew Male‘s “Eric Clapton’s Bookshelf” that demonstrated that you can read WAY too much into a series of books on a shelf in order to make a psychological profile of a celebrity, but it can also be very entertaining.

It was also interesting to hear from Vincent Connare, the man behind Comic Sans. I’ve no particular strong feelings about this typeface, but it does create passions in others and to hear the history from the person behind it is always interesting.

Where I feel the conference was a bit of a let down was in the “comedy” department. Since I was expecting a Storytelling conference about personal passions, I felt I was not there to watch comedy routines. This may have been my failing, rather than the organisers’, but I was not alone in this.

Certain talks were amusing and different, particularly George Egg‘s “Hotel Room Utensil Cookery”, but others were a complete disaster. Generally, if anyone was introduced as having some career in comedy, they came on trying too hard. Most of these could have been removed in order to shorten the day and we would have left happier, and sooner.

One final thought. The missing element at this particular event, in my opinion, was the opportunity for developing a community. There was a sense of community in the air, in the way people were disposed towards the speakers, in the back-channel discussions via twitter, and the limited mingling before sessions. However, there was no opportunity to develop this during the conference in any meaningful way.

I’m not saying that the event should necessarily become another networking event, but I think there was an opportunity missed to get the audience to explore their own “boring” stories, to consider sharing their interests with others even if they were not speaking on stage. Instead of a frankly rather bizarre spectacle of “live” Connect4, it might have been good to have James get the audience to admit to their own “unacceptable enthusiasms” and crowdsource topics for future events.

All of which would have worked particularly well with a glass of wine in hand. Maybe next year I can pitch a story about the Secret Life of the Wine Blogger, and share some vinous pleasures? I believe many would find that more than adequately “Boring”.

I leave you with one brilliant “take away” from the conference, which is this touching exploration by Marc Isaacs of the lives of a group of people who share a common lift.